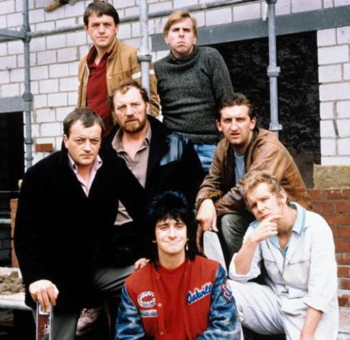 Comedy-drama from the writing team of Dick Clement and Ian LaFrenais. Season One (1983-1984) involved seven manual labourers from various parts of England. It was the mid-Eighties and there were no jobs to be found in this country, so they travelled to Germany to find work, forming themselves into a tight-knit group amid all the Culture Clash. They even used The Magnificent Seven title.

Season Two (1986) featured the same seven re-uniting and travelling from Birmingham to the English countryside to Spain on various building projects.

British Brevity was somewhat averted by these first two seasons, which contain 13 episodes each rather than the usual six. A third season was planned but shelved after Gary Holton, one of the seven principal cast members, passed away.

The strong accents (especially Geordie), including regional slang terms and the obscure British cultural references, would probably make the series almost completely unintelligible to anyone from outside the United Kingdom.

This programme provides examples of: