Film / The Bridge on the River Kwai 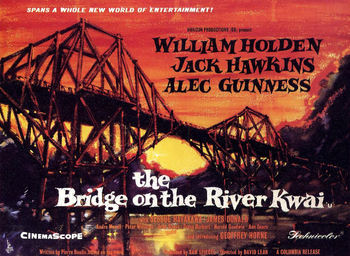 "One day the war will be over. And I hope that the people that use this bridge in years to come will remember how it was built and who built it. Not a gang of slaves, but soldiers, British soldiers, Clipton, even in captivity!"
— Colonel Nicholson
Advertisement:

The Bridge on the River Kwai is a 1957 World War II POW film directed by David Lean, about the construction of the bridges over the River Kwai, although it's heavily fictionalised. It's based on the French novel The Bridge over the River Kwai by Pierre Boulle, of Planet of the Apes fame; Boulle, who could neither read nor write English, was also credited for the screenplay adaptation due to actual screenwriters Carl Foreman and Michael Wilson being blacklisted.

The story: a British battalion is captured in Thailand and sent to a Japanese prison camp run by Colonel Saito (Sessue Hayakawa). Notable among the prisoners are Lt. Colonel Nicholson (Alec Guinness), the battalion's commander, and Major Clipton (James Donald), a medical officer.

The prisoners of war are being forced to build the bridge over the River Kwai, which when finished is supposed to help Japanese expansion. Saito tries to demoralize the British troops, but fails because of Values Dissonance. Nicholson decides to keep everyone's morale up by making sure everyone does as good a job on the bridge as possible, making it the best bridge they can.

Meanwhile, the British government is planning a covert mission to blow that bridge up, since its existence will help the Japanese. They draft an American, Shears (William Holden), into their effort (he has two valid excuses which, together, the Brits had already used to get him transferred to them). Shears, along with Major Warden (Jack Hawkins) and Lieutenant Joyce (Geoffrey Horne), parachute into the jungle and find their way to the bridge. They secure plastic explosives, but things go wrong quickly.

It's best known for its theme tune, the pre-existing "Colonel Bogey March" (which is far better known to nearly every Brit—including those at the time—for a set of lyrics to the tune about the lack of genitalia of certain senior Nazis).note  Director Lean wanted the film to open with the soldiers singing the vulgar version, but producer Sam Spiegel objected. But the film itself is a classic; it earned its seven Academy Awards, including Best Actor (Guinness), Best Director (Lean), and Best Picture.

The famous scene that most examples are referencing

The famous scene that most examples are referencing