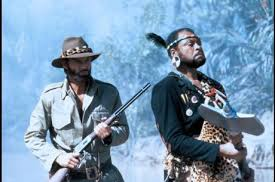 Being The Hero can take characters to lands far beyond their homes, and not all of them are easy to navigate. Perhaps the hero finds their goal is on the other side of the Rapids of Death or somewhere deep in The City Narrows. It's time to enlist the help of the native guide.

The native guide knows about the place they hero needs to pass through, whether they live in the area, have made the journey themselves, or are simply Closer to Earth and know more about the lands around them. The hero convinces or hires them to guide them where they need to go and the guide takes them there. Sometimes an unsavory guide will take advantage of the outsider's lack of knowledge to lead them into a trap, others may go out of their way to take shortcuts or take lesser known routes to show them some wonder of nature, and others simply get you from point A to point B. Either way, the native guide will take you exactly where they want you to go.

A Bold Explorer or Mighty Whitey often hires this type of character. May also be a Scarily Competent Tracker if the story is set in the wilds. May overlap with Army Scout.

Compare and contrast the Great White Hunter, who is a non-native often acting as a guide in the wilderness.