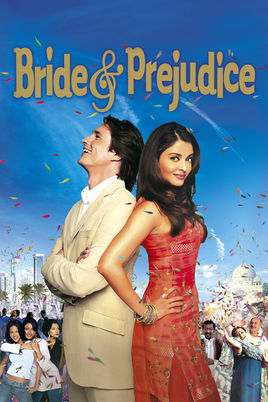 Quick-witted Lalita Bakshi is the second daughter in a family living in Amritsar, India. Her father dotes on her but her mother is determined to marry Lalita and her three sisters (Jaya, Maya, and Lakhi) off to respectable wealthy men. Her mother's fortune seems to look up, however, when the handsome and wealthy lawyer Balraj comes to town on the eve of a big wedding, his conceited sister Kiran and businessman best friend Will Darcy in tow. Jaya and Balraj seem perfect for each other, but Lalita finds Darcy arrogant and intolerant of Indian culture.
Advertisement:

Bride and Prejudice is a 2004 film directed by Gurinder Chadha (who also directed Bend It Like Beckham), which gives Jane Austen's Pride and Prejudice a Setting Update — to modern-day India. Events roughly parallel that of the novel, but punctuated with discussions of culture and gender, as well as several Bollywood dance numbers. The film stars Aishwarya Rai (Elizabeth/Lalita) and Martin Henderson (Darcy), as well as a host of other familiar faces.