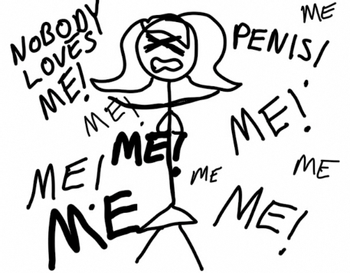 The Formula for a Teenage Girl is as follows... And don't even get started with a 1980s' version!
"Drama's a major food group for teenage girls."
— Elliot Stabler, Law & Order: Special Victims Unit
Advertisement:

Think everyone in a Dom Com with two X chromosomes is closer to Earth? Boy howdy, you haven't met this kid!

A standard member of the Dysfunctional Family, the Bratty Teenage Daughter is a natural offspring of the Bumbling Dad and his level-headed wife (who herself may have been one). The Bratty Teenage Daughter is a whiny, self-involved girl at That Age. She obsesses over the latest fashions and is incredibly boy crazy, often more so than her parents think. The two may combine to create conflict with her parents over what she wears. If she ever dates, expect her father to instantly turn into an Overprotective Dad. Basically, she will either go around acting like a Drama Queen and wangsting up over every minor little thing ("My life is ruined!") or else she'll just roll her eyes exasperatedly at the "wacky" hijinks the rest of the family gets up to, often becoming a bit of a sullen killjoy in the process.

Her most valued personal possession is the phone. She talks (or texts) endlessly on it with her friends, and breaks down when she's without it. In older media, this will lead to a confrontation with Mom where she tells her to stop tying up the phone lines. Today, these confrontations are likely to revolve around cellphone bills, or the loss of phone privileges as a punishment.

The natural enemies of the Bratty Teenage Daughter are assorted Annoying Younger Siblings, her Aloof Big Brother who usually treats her with scorn and anything else that upsets the status quo of her little world as she sits in her room listening on her headphones to the latest music from that hot pop star she has a huge crush on. She will be more averse to the Horrible Camping Trip than any other member of the family (and probably act like a City Mouse on that trip), near-continuously complaining about breaking her nails or how much she would rather be at the mall.

She tends to be a supporting character, with the show's focus usually only being put on her in the event of a Very Special Episode about drugs, underaged sex, etc. Often (but by no means always) an Alpha Bitch or a Brainless Beauty. If she's not, expect her to hide it carefully since smart people are never cool at that age. Is usually one of the sisters caught up in The Glorious War of Sisterly Rivalry. She can easily become The Scrappy if she's whiny and grating enough.

If the teenage daughter is the show's protagonist, she probably won't be this character, or at least, not as extreme a version. May sometimes have a brother in the Dumbass Teenage Son. She also tends to love shopping and is often easily-embarrassed. Due to her mood swings she is most likely one of the emotional temperaments of the Four-Temperament Ensemble, like sanguine or melancholic. She is more likely to be the Girly Girl of the Tomboy and Girly Girl ensemble.

If the show covers enough time, say if it's a Long Runner or involves a Time Skip or Revival, don't be surprised if she has children of her own and gets a taste of what she put her parents through.