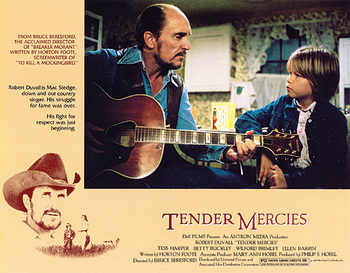 Rosa Lee (Tess Harper) is a widow with a 12-year-old son, Sonny. They keep the Mariposa Motel, a lonely Texas motel and gas station out on the desolate prairie. One night an alcoholic drifter named Mac (Duvall) winds up unable to pay for his room after his traveling companion departs in the night. Mac asks if he can perform some work around the motel to pay off his debt, and Rosa Lee agrees. After his debt is paid Mac asks if he can keep working at odd jobs at the motel in return for room and board, and Rosa Lee agrees again.

Eventually Mac and Rosa Lee fall in love and get married. It turns out that Mac is actually Mac Sledge, once a very famous and successful country music star, whose career was destroyed by his alcoholism. Mac has an ex-wife, Dixie Lee (Betty Buckley), who is also a country music star, and a daughter by Dixie, 18-year-old Sue Ann (Ellen Barkin). Will Mac conquer his demons and live a happy life with his new wife and stepson?