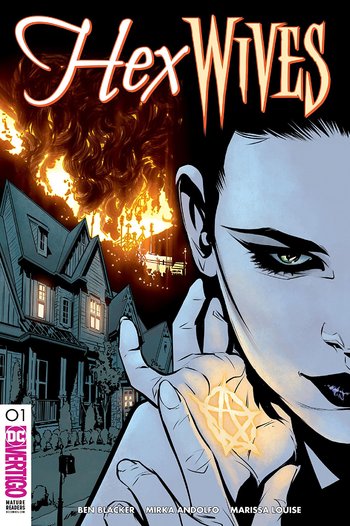 Hex Wives is a 2018 series from Vertigo Comics.

For hundreds of years a war has been waged between a coven of perpetually reincarnating witches and the all-male conspiracy known as the Architects. After the death of the lead Architect in 2005 it seemed the witches had finally defeated their foes.

Now, 13 years later, waking up in a perfect cookie cutter home at the end of a cul-de-sac in a sunny corner of suburbia, Isadora has no recollection of her past life as the leader of a witch coven, nor her soulmate Nadiya, let alone the centuries-old war she has waged in defense of the soul of America…