Roll in the Hay 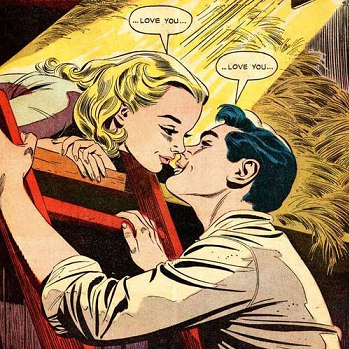 The needle is here, but which haystack to put it in?
A popular trope in many stories set on a farm. A young couple decides to make love while lying in a hay barrack in a barn or one in an open field. One of them (or both) can be the teenage son or daughter of a farmer, but it might also be a general couple who just happen to encounter a hay barrack while being in the countryside.
Advertisement:

Usually they are fleeing from the wrath of the girl's Overprotective Dad, but rain, police, soldiers, or nightfall can be opportune reasons as well. For some strange reason, their pursuer will be unable to find them, even though a bunch of hay might be the most logical hiding place ever. As he leaves, the couple makes love to celebrate the fact that he couldn't find them.

Also Truth in Television, as many young people who grew up in the countryside will tell you. Of all the possible locations for surreptitious lovemaking and/or hiding, a hay barrack is the most obvious choice. It's soft, comfy, and ticklish. While the term "roll in the hay" can also be an expression for casual sex and/or quickies in general, this trope is specifically about sex on a pile of hay.