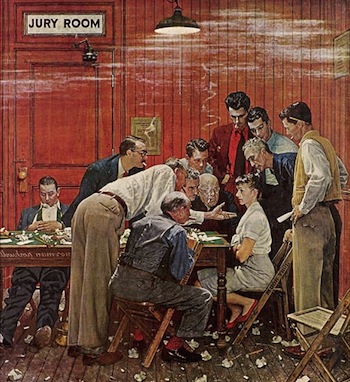 You've seen it a million times: a character is serving on a jury and is the lone person holding out for a "not guilty" verdict.

Sometimes another main character is on the jury as well and tries to change the Rogue Juror's mind. More commonly, the Rogue Juror will manage to gradually bring the rest of the jurors around to his/her view. Occasionally this will be subverted by having the defendant turn out to actually be guilty.

Note that in many jurisdictions, a unanimous jury verdict is not required either to convict or acquit. However, unanimity is a characteristic of the English judicial system and many of its former colonies such as the United States (the modern UK and US also don't always require it, though). Outside of those countries, a Rogue Juror's objection would be futile.

This is a common template for a Courtroom Episode and frequently turns up in Sitcoms. Very likely to involve a Shout-Out, if not a Whole Plot Reference, to 12 Angry Men.