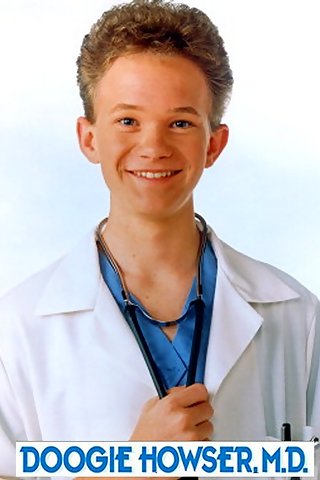 Doogie Howser, M.D. was a weekly half-hour comedy drama starring Neil Patrick Harris as Douglas "Doogie" Howser, a teenaged child prodigy who became the youngest practicing physician in the country. It ran from September 1989 to March 1993, and plotlines covered not only medical issues but also Howser's everyday teenager issues. Doogie's best friend, Vinnie, is a more typical teenager and helps keep Doogie grounded in life outside his profession.
Advertisement:

The series enjoyed success on ABC for four seasons, taking home a People's Choice Award in 1990, and 3 consecutive Emmys for Best Sound Mixing. Harris also received a People's Choice Award and a Golden Globe nomination for his role. The brainchild of TV legends Steven Bochco (creator of Hill Street Blues, L.A. Law, and NYPD Blue) and David E. Kelley (Ally McBeal, Chicago Hope, The Practice, Boston Legal), the show was praised for its writing and characterization, but also just as equally mocked and criticized for its over-the-top premise (Harris later joked that this was the first show ever to be created on a dare).note Someone as young as Doogie would in fact not be allowed into med school even if they were smart enough to know all the information, as their emotional development is also taken into account. When the show ended, the specter of Doogie Howser haunted Harris' career for a long time, until he was able do some Adam Westing based on Doogie Howser MD in Harold & Kumar Go to White Castle and break out of the type-casting that the show saddled him with entirely through his role in How I Met Your Mother.

In 2020, a Reboot of the series was announced to be development for Disney+. Titled Doogie Kameāloha, M.D., the series will follow a different teenage doctor, a mixed race girl who shares the original's nickname, and her life in Hawai'i. In 2021, the series was given a straight-to-series order and Peyton Elizabeth Lee was cast as the title character. note  Interestingly, the original show exists as a work of fiction in the universe of the reboot. The main character is nicknamed "Doogie" as an In-Universe Shout-Out. How this will be reconciled if Harris appears in season two (as both he and the creators want) is unknown.

This Series Contains Examples Of: