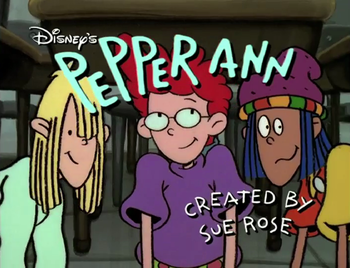 Pepper Ann is a 1990s Disney-produced Saturday Morning Cartoon that ran on ABC's One Saturday Morning and UPN's One Too blocks from 1997-2000. It centers on 12-year-old Pepper Ann "P.A." Pearson, her family, friends, and schoolmates. Pepper Ann's parents are divorced, and she lives with her mother and younger sister "Moose". Nicky, a smart and soft-spoken violinist, and Milo, an aspiring artist, are her two best friends with whom she goes through a humorous and entertaining series of junior high adventures wherein she faces obstacles, enemies, and choices, and comes out right in the end.

The show was aimed at young and tween girls, and thus features several strong female protagonists. Pepper Ann herself is sharp and spontaneous, with a vivid imagination. Various episodes feature elaborate fantasy sequences that help her sort out each episode's dilemma. Nicky is extremely mature; she is serious about school, her music, and her future, and is the only character to have a steady boyfriend. Pepper Ann's mother Lydia is hard-working but loving; some episodes deal frankly with the strain and challenges she faces as a single parent. And Moose, Pepper Ann's sister, is a confident tomboy.

Much of the action takes place at Hazelnut Middle School, where various cliques and characters, including Trinket, obligatory crush Craig Bean, and sometimes love-interest for Milo Gwen Mezzrow as well as a wacky cast of teachers and administrators. As is typical for a kids' show of its time, the episodes cover a wide variety of topics, from lighthearted plots like crushes, zits, and video games, to more serious issues of divorce and disappointment.

The series was adapted by Sue Rose, also known for creating the advertising mascot Fido Dido, and adapted from short comic strips she created which appeared intermittently in YM Magazine in the early 1990s.

Pepper Ann and her mother made a brief cameo appearance in the first episode of House of Mouse.

As of September 8, 2021, the series is now available for streaming on Disney+.

"Catch her if you can, Pepper Ann!"
Feedback

Thumbs up to the parmesan

To the bewilderment of her friend and their own dates, Pepper Ann has a moment of absent-mindedness in front of them.

Thumbs up to the parmesan

To the bewilderment of her friend and their own dates, Pepper Ann has a moment of absent-mindedness in front of them.