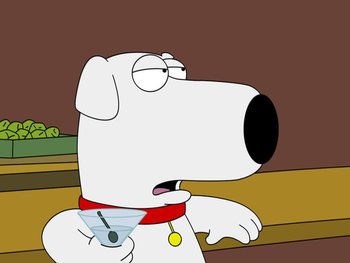 "Whose leg do you have to hump to get a dry martini around here?!"

The Griffin Family's talking pet dog. He is a sophisticated and cultured, but cynical and world-weary Labrador, who serves as the voice of reason to the family, ironically managing to be the most "human" of all of them. In later seasons, Brian developed into a more pretentious and self-absorbed narcissist.

Voiced by Seth MacFarlane, using something very close to his natural speaking voice.