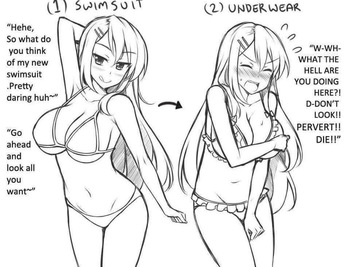 "Do you know the difference between nude and naked?"
He shook his head.
"Nude is artistic. Naked is defenseless."
— Larry Niven, "Cloak of Anarchy"
Advertisement:

Any nudity where it's not really nudity, but someone's freaking out anyway.

A husband and wife run outside to grab the paper that's sitting on the porch. Darn it, the door is locked and now they're both stuck outside! The husband is horribly embarrassed because he's outside in the nude, meaning that he's wearing a white tanktop undershirt, boxer shorts and socks. (Maybe because it's Goofy Print Underwear.) But he's embarrassed anyway. Meanwhile, his wife is ashamed when the busybody neighbour sees her naked, meaning that she's wearing a dress-like slip that covers her from shoulders to knees. The busybody neighbour then calls the police because of all the public indecency, despite the fact that it's more than most people wear to the beach.

Still, if you walked into Walmart wearing nothing but a thong and a bra, you'd probably get some security guard showing you to the door. So it's not an entirely unreasonable reaction. Undergarments, themselves, have been considered obscene at times, such that seeing them exposed without outerwear (or even hanging from a clothesline!) might also be deemed "indecent", whether or not there're excessive amounts of skin on display. And people differ in their perceptions of modesty, not only across time (Victorian era women 16 and up couldn't even show their calves, and the '50s saw the above porch example as pretty embarrassing) but even in modern Western civilization (where some of us still think it's crass to let a bra strap show).

Some examples of this trope, particularly in visual media, may be an example of censored nudity; even though the character is shown in their underwear the audience is supposed to know that they're "really" naked.

See Also Fetish, Our Nudity Is Different, Please Put Some Clothes On, Non-Nude Bathing, Family-Friendly Stripper. For when Bowdlerization causes this, see Digital Bikini. Contrast National Geographic Nudity, where the characters are completely naked yet nobody freaks out, due to Values Dissonance. The opposite of this trope is character that has no nudity taboo such as an Innocent Fanservice Girl or Shameless Fanservice Girl. Also compare and contrast Stripperific.