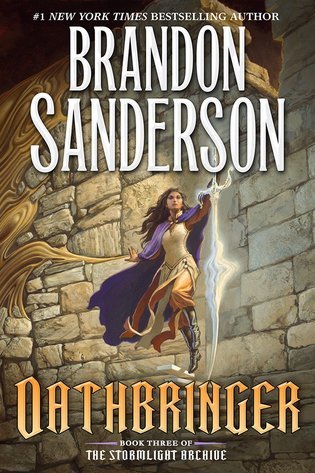 My glory and my shame.
Advertisement:

"What is the most important step a man can take?"
— Dalinar Kholin

Oathbringer is the third book in Brandon Sanderson's Epic Fantasy series The Stormlight Archive, taking place on the world of Roshar, characterized by its Hostile Weather and Giant Enemy Crabs. Just as previous books focused on Kaladin and Shallan, Oathbringer centers around Dalinar Kholin, Highprince of War for Alethkar, as well as leader of the reborn Knights Radiant and a member of the Order of Bondsmiths.

At the end of Words of Radiance, the Parshendi became Voidbringers and summoned the Everstorm, an evil highstorm that blows the wrong way. Kaladin and Shallan revealed their Surgebinding abilities and opened the way to Urithiru, fabled city of the Radiants. Once there, Dalinar bound the Stormfather himself as his spren, and Renarin revealed himself to be a Truthwatcher. Realizing that the parshmen in his home village would soon become Voidbringers, Kaladin flew off to warn his family, while everyone else remained behind to explore the city.

Despite traveling hundreds of miles in half a day, Kaladin runs out of Stormlight before he reaches home, and has to walk the rest of the way, resulting in the Everstorm arriving before him. Just as he is giving up hope of anyone having survived, some soldiers in the manor spot him and pull him inside.

Meanwhile, Jasnah (having survived the attack on the Wind's Pleasure by teleporting to Shadesmar) has returned to the Physical Realm to find Hoid, the King's Wit, waiting for her. He cheerily tells her that Shallan did her job for her, before they begin the long walk back to civilization together.

And Szeth-son-Neturo, formerly the Assassin in White, has been inducted into the Skybreaker Order by Nalan'Elin, Herald of Justice himself. Nale tells him that he should never have been made Truthless, but praises him for holding to his ideals regardless. Now, it is time to return to punish the Shin for their crimes. To that end, the Herald has a new sword for him, a black Shardblade with a metal sheath.

"Hello. Would you like to destroy some evil today?"