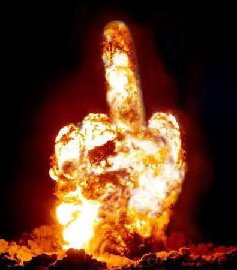 Giving the nuke and the bird all at once.
"Will you never cease prating of laws to us that have swords by our sides?"
— Gnaeus Pompeius Magnus
Advertisement:

Most of the modern world is built on the principles that justice is blind and that no man is above the law. Thing is, much as those principles are great, they rely on someone being willing and able to enforce the law. This trope is what happens when there's nobody who can or will.

Maybe someone has a bigger army than the police, maybe they have a nuke buried under a major city, maybe they just have superpowers that render them nigh-invincible, but in any case, they are free to break any law they want without fear of any sort of official justice.

More formally, this is known as the "Argumentum ad Baculum"note Literally "appeal to the stick" or the Appeal to Force, whose logic goes essentially thus: "I'm right, and if you disagree, I will physically harm you." The fact that this is obviously not valid doesn't stop it from being persuasive. The phrase "talk shit, get hit", while crude, is one of the most common real-life applications of this particular fallacy.

Some political theorists consider this to be the basis of all law and ethics. The idea is that laws are just rules enforced by the threat of violence — they don't have to be good or noble, they just have to threaten you if you break them. Hence why anybody can get away with useless, inefficient, and silly laws if the legislators have the weapons. Needless to say, this argument is rather on the cynical side of the sliding scale, and one of the most popular themes of a totalitarian dystopia, though that doesn't necessarily make it untrue.

Of course, there is a catch. Unless you have the ability to live without sleeping and eating, sooner or later you have to put down the weapon. If you're the biggest badass in the room, there's always the risk that somebody will slit your throat from behind. If your gang of supporters will avenge your death...that leaves you with the need to keep your gang happy. Plus, there's always the problem of old age... Besides which, while you may be able to convince people that you're right just by being more powerful than them, nature is not so forgiving: you can threaten people all you like to extort everything they have from them, but you can't take from them what they don't have, and threats will not make goods appear out of nothing.

See also 2 + Torture = 5, An Offer You Can't Refuse, Fisticuff-Provoking Comment, Hobbes Was Right, Might Makes Right, Mutually Assured Destruction, Shoot the Shaggy Dog, Screw the Rules, I Have Supernatural Powers!, Sexual Extortion, Questionable Consent, and Sword of Damocles. Frequently the next step after Screw the Rules, I Make Them! does not work, and related to Screw the Rules, They're Not Real!

Those are good reasons

Those are good reasons