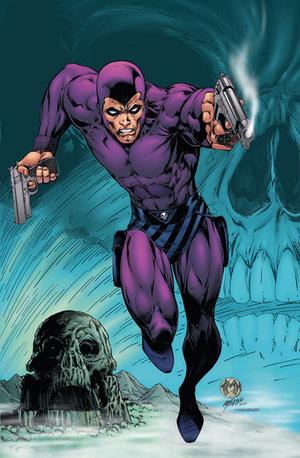 "I swear to devote my life to the destruction of piracy, greed, and cruelty, in all their forms, and my sons and their sons, shall follow me."
— The Oath of the Skull
Advertisement:

By some accounts the first costumed superhero in comics, the Phantom was created by Lee Falk (creator of Mandrake the Magician) in 1936 for King Features Syndicate and has been fighting evildoers on Newspaper Comics Pages around the world ever since.

In Darkest Africa, in a secret valley guarded by sinister blowgun-wielding pygmies, dwells the Phantom. Immortal, implacable, foe to all evildoers, pirates especially: criminals everywhere speak in hushed whispers of the Ghost Who Walks, the Man Who Cannot Die.

Except that, well, he can. And has, repeatedly. The current Phantom is the 21st of the line, continuing a tradition begun four centuries ago when his forefather washed up on a lonely African beach, the sole survivor of a pirate attack, and was nursed back to health by the sinister pygmies (who are actually quite nice once you get to know them). He is just a normal man, with no supernatural powers (save his skull ring, which forever leaves its imprint on anyone he punches) — but, much like in Batman, criminals are a superstitious, cowardly lot, and they're much easier to beat if they're already afraid of you.

The Phantom has no Secret Identity. Each man who takes up the mantle forswears all former attachments and becomes all-Phantom, all the time, from that day forth. When he needs to walk the streets as an ordinary man, he puts an "ordinary man" disguise over it. The disguise has a name, "Mr. Walker", (i.e., "The Ghost Who Walks") but is otherwise a cipher. How he negotiates airline booking desks and customs checkpoints has never been revealed, although obviously the Bangallan government facilitates the situation, as the Phantom works closely with Bangallan authorities. He has a wolf companion, Devil, and had an ongoing on-and-off relationship with his Love Interest Diana Palmer until they married.

Developed during the Golden Age, and written by a single author for over sixty years, The Phantom is a bit of a living fossil. Representations of women and minorities have become more sophisticated, but it has never tried to become darker or more realistic.

By mid 2000s, though you could still find further issues from Moonstone, the current publisher, those were rare, too expensive due to very low sales, and new releases were few and far in between.

The Phantom has been adapted for film twice. A 1943 film serial starred Tom Tyler as the Phantom and Ace the Wonder Dog as Devil. Better known (if not better regarded) is the 1996 film starring Billy Zane as the Phantom, Kristy Swanson as Diana Palmer and Catherine Zeta-Jones as Sala.

The Phantom has had three Animated Adaptations. He appeared in the 1972 special The Man Who Hated Laughter and the 1986 series Defenders of the Earth, both of which teamed him up with other King Features characters. In 1994 he got his own show, the Cyberpunk-ish Phantom 2040. He's also the subject of a Syfy miniseries. Dynamite Comics has also revived the character with their Kings Watch miniseries, leading into a solo series where Lothar takes over the role of the Phantom while searching for the actual heir to the identity (the previous Phantom having taken it on his predecessor's deathbed, then performed a Heroic Sacrifice to prevent more of Ming the Merciless' forces from invading Earth). Also from Dynamite, but in a separate continuity is the Darker and Edgier The Last Phantom.

Adaptations and spin-offs with their own trope pages include: