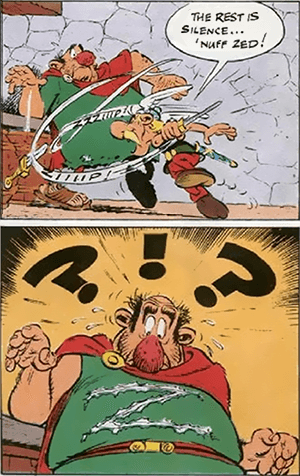 A character makes an impression by cutting, burning, blasting, or otherwise leaving a symbol on the clothes, wall, or person of their nemesis. Thankfully (for them), they never have to deal with paying for the damage they just inflicted.
Advertisement:

One common variation is an homage to the Trope Namer, wherein someone uses a rapier to slice cuts into clothing that form the shape of their Calling Card. While this would be perfecty plausible with a sword designed for slashes like a scimitar, the sword actually used, the rapier, is less than ideal, being designed for thrusting attacks.

A Subtrope of the Calling Card. If this is done with an open flame, it's a Flaming Emblem. If etched into the person's skin, it's A Scar to Remember. Compare Mark of Shame.

Example of:
A Scar to Remember