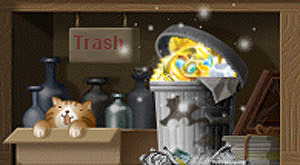 One man's treasure is another man's trash... But I can't see why someone would throw out that adorable kitty!note If someone does own the cat, they probably can't keep it away from that box.
Quark: Someone's extracted all the latinum! There's nothing here but worthless gold!
Odo: And it's all yours.
Quark: NOOOOOOOOOOOOOOO!
— Star Trek: Deep Space Nine, "Who Mourns for Morn?"
Advertisement:

The characters of a story run across something very valuable. But, due to ignorance, stupidity or Values Dissonance in its most literal application, they discard it as worthless junk. The audience groans in disbelief as earthly wealth beyond their wildest dreams is left lying on the floor (if not thoughtlessly trampled upon). Alternatively, while they might find some use for it that use is a mundane, insultingly boring utility that is far below its actual value and capability.

Finding gold is the most common example of this trope: Though it has industrial applications as a highly corrosion-resistant electrical conductor and potential as a cheaper alternative to platinum catalysts, almost all of gold's value is due to its rarity (the pretty shine doesn't hurt either). And, in a disaster situation, gold would quickly prove to be worthless after all. This can lead to an ironic Death by Materialism situation for someone who's "smart" enough to figure out what those funny yellow rocks really are and won't abandon them when they really should be running for the door. Compare All That Glitters.

A common Karmic Twist Ending is for Earthly characters to encounter a world or dimension where something like gold is so plentiful that it has little value, or where something common on earth, like aluminium or copper, takes the place of gold or platinum as the ultimately rare precious metal. (Ironically, aluminium actually was more valuable than gold once; see the Real Life section below.) Of course, given what science knows about the formation of elements, it is highly unlikely that there are any solid-gold planets out there, no matter how amazing it would be. On the other hand, there is a giant space-diamond. Probably a whole lot of them.

There is Truth in Television for the reasoning behind this trope. There is a law of economics where materials decrease in value as they become more abundant. (Refer to the above paragraph.) Trade in general, when done honestly, is fundamentally what happens when two people come together and agree that something the other guy has is more valuable to them than something they can afford to give away.

Also common is the devaluation of diamonds 20 Minutes into the Future after the invention of successful synthesis technology.

Diamonds are not made of an intrinsically valuable or rare element, but common carbon, so advanced people from the future or space-faring aliens are likely to consider them somewhat common and utilitarian. For that matter, they aren't that rare now (about as common as rubies, which have a much lower market price); their perceived value is mostly a combination of enforced artificial scarcity and sucker-rearing by the distribution companies.

Using this with petroleum may constitute a research flub, if a writer assumes its only conceivable function is to fuel modern machines, ignoring its previous uses for waterproofing, oil lamps, etc. and other modern uses like chemical synthesis, including most polymers and numerous medications. Even in the mid-1800s at the heart of the industrial revolution, a chemist interviewed in Scientific American opined that burning oil and coal as fuel was this trope, given the array of uses for natural stockpiles of inefficient-to-manufacture

May be part of a Green Aesop on how foolishly humanity rushes for unnecessary luxuries and how money cannot be eaten. This trope is also a common trait of the humble Noble Savage.

Not to be confused with Green Rocks (though they can overlap). See also All That Glitters and Common Place Rare. Kids Prefer Boxes is the G-rated version. Sometimes the species in question has a reason to not care about the shiny yellow rocks... A counterpart is Only Electric Sheep Are Cheap; both can exist in the same work. When video game money is useless because there's nothing to buy with it, that's Money for Nothing.

Compare Grail in the Garbage, Simple, yet Opulent (in that some things are only opulent to some). Also, Money Is Not Power which is when characters intend to bribe their way out of a situation, only to be told, or show, that their wealth won't save them this time.

Contrast Gold Fever (where people go nuts over amounts of gold or some other valuable), Gold Makes Everything Shiny, Gold-Colored Superiority, Mundane Object Amazement, and My New Gift Is Lame. Not to be confused with Gold Is Yellow, although the two could overlap.

Also not to be confused with pyrite, also known as "fool's gold".

Traveling to the sunken island of New Zealand, Miss Pauling learns what Bill-Bel did with the last cache of Australium in the entire world.

Traveling to the sunken island of New Zealand, Miss Pauling learns what Bill-Bel did with the last cache of Australium in the entire world.