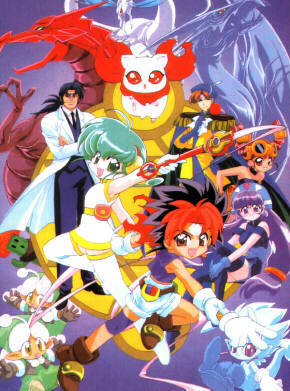 Mon Colle Knights is a Action-comedy anime. It can be considered a parody of various things, itself included. Based on a Collectible Card Game, the show is gag-driven for the most partnote Even in the original Japanese version and deals with two "teams" traveling to an Alternate Universe to gather six magical items that will enable them to connect their world with the Six Gates world. The lead characters, a Mad Scientist (Ichirobei Hiiragi) who recruited his daughter (Rokuna Hiiragi) and her boyfriend (Mondo Ooya) as "Mon Colle Knights" compete with Count (Ludwig Presto Von Meinstein) Collection and his lackeys, who try to gather the items to rule the world.

By the way, there are a few episodes less upbeat and silly, which begin to pop up a little more towards the end...

After 18 years of being in Saban limbo, Discotek Media has rescue licensed

the whole series and it's streaming on Crunchyroll

Look for these tropes in Mon Colle Knights: