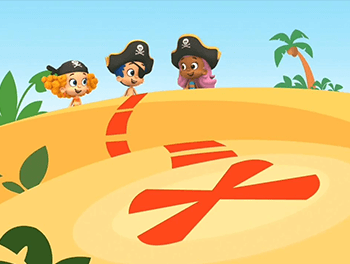 "To whoever finds this, check this out. You're totally not gonna believe what I just found! That is an actual spot in the shape of an actual X. X marks the spot. X is the spot! Mind blown."
— Zak (recording his find), Zak Storm, "Morlock the Unstoppable"
Advertisement:

In your everyday stock Pirate Booty Treasure Map, a path is drawn on a dotted line. It goes past illustrations of dragons and dolphins and palm-trees before coming to a complete stop at an "X". This is usually where you can find the stolen cargo buried on that beach. Bonus points if, upon arrival at the site of the buried treasure, there is an "X" on the ground as well.

Not to be confused with the educational short film of the same name. Compare Map Stabbing, for when something important is marked on the map using a weapon.

Some Toads on the Great Sea's islands will award you with treasure locations when you rescue them, indicated by an X.

Some Toads on the Great Sea's islands will award you with treasure locations when you rescue them, indicated by an X.