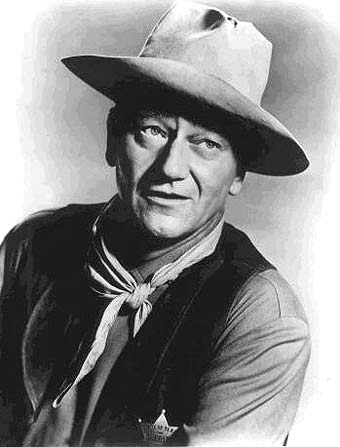 "I define manhood simply: Men should be tough, fair and courageous, never petty. Never looking for a fight but never backing from one either."
— John Wayne
Advertisement:

John Wayne (born Marion Michael Morrison; May 26, 1907 – June 11, 1979), nicknamed "Duke",note Originally "Little Duke", which came from his childhood habit of going everywhere with his dog "Duke" and was the name he'd answer to. He actually wouldn't notice, or even get confused, when people called him "John Wayne" is considered by many to be the closest thing to the epitome of manliness in American film. For the most part, Wayne had two roles on-screen: he was either a cowboy or a serviceman. It didn't matter which he was, though, because he was John Wayne.

A former college football star at USC (where a leg injury led to his well-known gait), Wayne got his start as a bit actor before John Ford cast him as a major player in the movie Stagecoach. From there, he went on to appear in dozens of Westerns, including She Wore a Yellow Ribbon, True Grit, The Searchers, and McLintock!. Occasionally, he switched to being a soldier (assuming, as was the case in Ribbon, he wasn't both at the same time), and his wartime roles include a paratrooper in The Longest Day.

However, as said earlier, just about all of his movie roles were the same: A gruff man, world-weary and realistic, but definitely not one to take no for an answer; probably harder on himself than anyone else is; not a fan of violence, but when the chips are down, turns out to be a spectacular fighter; at best confused about women and at worst saw them as a hindrance, but eventually warms up to one and gets over his prejudices; on the other hand, often said to hold views on minorities, especially Native Americans, that are shockingly racist even for the times. (Hondo is a notable aversion of that last one....)

At this point, John Wayne is more an invocation of the Cowboy Cop or the manly man than he ever was in films. His most famous scenes were always the fight scenes, which ranged from dramatic (The Searchers) to comical (McLintock!). In addition, his stilted delivery and loud, commanding voice have made him the subject of imitation by just about anyone worth their imitating salt. None of it matters: he is seen as the man's man, so much so that one beer company spliced his movie footage into a series of their ads (after all, what's more manly than John Wayne and beer?).

If there is a trope in The Western, odds are Wayne used it (or, almost just as likely, invented it). (As a 17-year-old set dresser, he met an aging Wyatt Earp several times, and is said to have based his Western characters on his perception of Earp from their conversations). He also did lots of things that are covered by the Rule of Cool. But above all, he just made great movies that people love to watch, full of suspense, silliness, fistfights, and down-home American values. No wonder his style is often the caricature of America overseas, although nowadays his roles would likely be filled by a Boisterous Bruiser.

When he is invoked in politics, it is usually as a call for honor and fair play, as he said of President Kennedy:

I didn't vote for him, but he's my president and I hope he does a good job.

Although Wayne is known for his ultraconservative activism— among other causes, he staunchly supported the Hollywood blacklist and The Vietnam War— he rarely let politics interfere with whom he worked with. Kirk Douglas, as liberal as Wayne was staunchly conservative, praised Wayne for his willingness to keep promises and help other actors find roles.note Douglas cited Cast a Giant Shadow as an example; the film's director, Melville Shavelson, spent years trying to interest studios in the project, without success. Shavelson showed the script to Wayne, who liked it but thought he was wrong for the lead role, Mickey Marcus. He convinced Shavelson to cast Kirk Douglas instead, appearing in a brief cameo, while helping to secure financing and studio backing for Shavelson behind the scenes. When George Takei balked at appearing in The Green Berets for political reasons, Wayne told Takei that he didn't mind his politics - he only cared that Takei was right for his part. For The Cowboys, Roscoe Lee Browne was advised by his friends not to work on the movie due to Wayne's notorious politics concerning black Americans. Browne did so anyway and surprisingly, he got along well with Wayne, due to their shared love of poetry.

Today his political views would be considered far-right due to his attitudes on race which were condescending at best and blatantly bigoted at worst; in a now infamous 1970 interview for Playboy, he proudly stated "I believe in white supremacy until the blacks are educated to a point of responsibility", and "There were great numbers of people who needed new land, and the Indians were selfishly trying to keep it for themselves." Additionally, he was generally skeptical about the Civil Rights movement, believing minorities should be "grateful" for being born in America and stop "bellyaching so much". While old and suffering from cancer by then, Wayne tried to physically assault Native American activist Sacheen Littlefeather during her speech at the Oscars in 1973, and had to be restrained by security. On the other hand, he was by no means a party line Republican; near the end of his life, for instance, Wayne supported returning the Panama Canal and publicly criticized his friend, Ronald Reagan for opposing the Canal treaty.

The rendering of America as 'Murica, was inspired by Wayne's signature drawl which has become one of the most recognized stereotypes of American culture. This spelling is often used as part of a critical statement on particularly American mentality, especially concerning the perceived American obsession with owning guns, for example. More than anyone else, Wayne is probably the one responsible for shifting American conservatism away from its genteel, country-club image and toward the rough-and-tumble, often disgruntled reactionary cultural attitude it has today. His son Patrick is respected by cinephiles as a good character actor in many of John Ford's films, but is conversely reviled by game show fans for (badly) hosting the 1990 version of Tic-Tac-Dough. His grandson, Brendan, is also an actor, and one of four men physically portraying Star Wars antihero Din "The Mandalorian" Djarin (played mainly by Pedro Pascal).

Orange County, California's airport is named after him; this fact has been a point of controversy over the years due to Wayne's political views, and the re-unearthing of the aforementioned Playboy interview briefly led to calls to have the airport renamed.

Some of Wayne's famous films include: