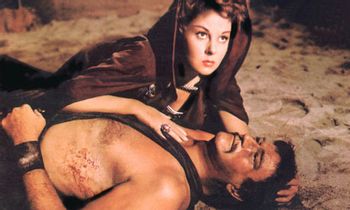 Yep, it's the king and queen of the Mongols.
"The Conqueror? Mighty armies cannot stop him. But one touch of my lips… Yes, he captured me – but he cannot tame me."
Advertisement:

It is the story of Genghis Khan (Wayne) and his rise to power. The great Khan, then called Temujin, is at the time the movie starts already the lord of his own tribe of Mongols. Temujin and his band stumble across a caravan of Tartars, sworn enemies of the Mongols, their chief Kumlek having murdered Temujin's father. Among this caravan is Kumlek's luscious daughter Bortai (Hayward), who had been promised to marry a Tartar prince, Tartugai. Temujin takes a fancy to Bortai, attacks the Tartar caravan, and carries her away, against the advice of his lancer Jamuga. This triggers a war between the Mongols and the Tartars, with Temujin appealing to the Chinese forces of Wang Khan for aid.

The Conqueror is one of the most notorious films ever made in Hollywood, for multiple reasons. It was part of the death spiral of RKO Pictures under Howard Hughes. Despite actually doing pretty well at the box office, it still couldn't recoup its bloated budget, and RKO went out of business not long after. It is a member of the WTH, Casting Agency? hall of fame, with John Wayne – John Wayne – being cast as Genghis Khan, wearing some sort of brown makeup with a silly Fu Manchu mustache.

And then there's how it may have killed a bunch of people. The film was shot in the desert of southwest Utah, downwind of and three years after Operation Upshot-Knothole, a series of nuclear weapon tests, in the deserts of Nevada. After many of the cast and crew died of cancer, including director Powell and all the stars, some have hypothesized that fallout from the detonations, most notably the "Harry" shot due to its high fallout deposition, caused their cancers. There's no concrete reason to believe that

, and it's entirely possible that other factors, like the fact that most of them, as it was common of those days, were chainsmokers, led to the illnesses, but the notion of radiation fatalities has been associated with The Conqueror ever since.