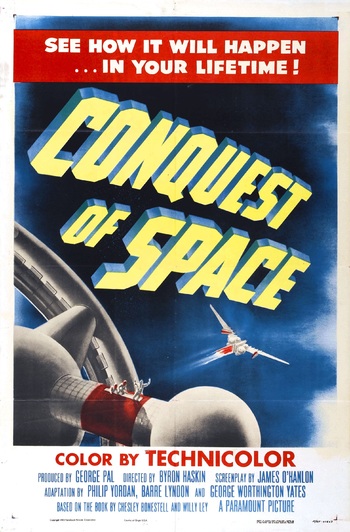 Well, maybe in some other lifetime...
Advertisement:

Conquest of Space is a 1955 American science fiction film produced by George Pal and directed by Byron Haskin.

Mankind has achieved space flight capability, and built a space station in orbit above Earth known as "The Wheel", commanded by its designer, Colonel Samuel T. Merritt (Walter Brooke). An Earth inspector arrives aboard the station with new orders: Colonel Merritt is being promoted to general and will command a new spaceship sent to Mars. As General Merritt considers his crew, his close friend, Sgt. Mahoney (Mickey Shaughnessy) volunteers, but the general turns him down for being 20 years too old. His son, Captain Barney Merritt (Eric Fleming) volunteers to be the second officer. After launch, Sgt. Mahoney is discovered to be a stowaway, having hidden in a crew spacesuit.

The flight encounters different dangers, and one of them is the general's undiagnosed and growing space fatigue that is beginning to seriously affect his judgement, which combined to his religious beliefs might get in the way of the mission.