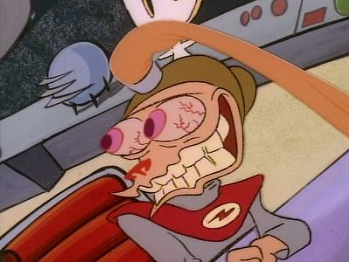 SPACE MADNESS.
"Being lost in space has been known to drive one mad. Too much time contemplating infinity is not good for the mind."
— Allura, Voltron: Legendary Defender
Advertisement:

Something about the deep recesses of outer space seems to inspire insanity in a lot of fictional characters. Maybe it's the loneliness (what with them being cut-off from the rest of their kind), the feeling of insignificance it inspires, or more specifically to a story the things that mankind was never meant to encounter. And as if the deprivation of social interaction isn't bad enough, there is also the effect of spending too many weeks with nothing productive to do between course corrections. Then there's the added lack of basic features of the environment on Earth such as gravity strong enough to feel, days and nights, and an atmosphere which leads the human mind that can't handle the emptiness itself, for any length of time, to start making things up to fill it. Regardless, a good chunk of fiction seems to link outer space with insanity. Can occur with Ludicrous Speed.

The trope takes its name from an episode of The Ren & Stimpy Show, about, well, Ren's space madness (and only Ren's, because his moronic sidekick Stimpy seems to be immune). It is of course an example of SpaceX.

Compare Ocean Madness, since Space Is an Ocean and all that and Space Isolation Horror. Cabin Fever is a related trope, due to its similarities to the close confines of a spacecraft.