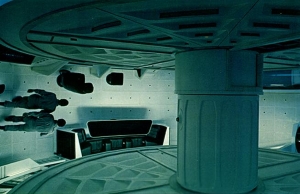 Gravity created within a spaceship, Space Station, or habitat by spinning it.
Advertisement:

Currently this is the only way humans have to generate gravity where there ordinarily would be none, or a negligible amount. The only other way consistent with established physics is to accelerate at a rate comparable to or higher than Earth's gravity. Rockets do this for a few minutes at launch, but the duration is limited by the amount of fuel available; sustained high acceleration would require more fuel than any practical-sized spaceship could carry. While Centrifugal Gravity is most often found in connection with Ring World Planets, it is not limited to them, and the shape of the ship or habitat is irrelevant to whether this trope is in use or not.

The biggest obstacle to this trope in Real Life is the impracticality of making large enough centrifuges. Your ears are very good at sensing motion and gravity (it's how you balance) and while you're being spun around in a small centrifuge, you're subject to the Coriolis Effect

, and so if you happen to turn your head to look left or right, you'd feel nauseous (as many who have ridden in the Gravitron

could tell you). The benefits of gravity simply didn't justify the extravagant cost that designing a spinning space station would require. note Especially considering they'd have to design it to handle emergency situations that would necessitate the station to stop moving; in other words, everything would have to be designed to operate in two modes. This would have made the project several hundreds to several thousands of times more expensive than it already would be. NASA and other space programs simply weren't willing to design what would essentially be a multi-billion dollar failure-prone space puke bucket. This being said, a modest reduction in the cost of building a station would make this worthwhile for very large stations that could turn more slowly (which would also not run into the nausea issue as much); however, there is nothing today to make such large stations possible or desirable.

Usually appears in hard science fiction; in softer works you can get away with generating Artificial Gravity by throwing enough Applied Phlebotinum at the problem, instead. (Which also tends to be easier to film or animate... Not every production can afford to build a giant centrifuge for its actors to walk around in à la 2001!)