Literature / The Mote in God's Eye 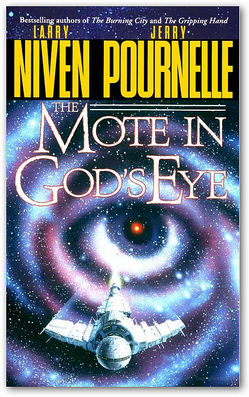 The Mote in God's Eye, by Larry Niven and Jerry Pournelle, is a science fiction novel that was first published in 1974. The story is set in the distant future of Pournelle's CoDominium universe, and charts the First Contact between humankind and an alien species. The title of the novel is a wordplay on Luke 6:41-42 and Matthew 7:3-5. The Mote in God's Eye was nominated for the Hugo, Nebula and Locus Awards in 1975.
Advertisement:

The Mote in God's Eye might be one of the more realistic depictions of a first-contact story. The discovery of alien life is sudden and unexpected, and most of the book deals with the diplomatic/military/espionage group that is sent by the humans to meet the new species. A great deal of tension arises between the humans and "Moties" who have a very dim understanding of each other at first, and between the xenophilic scientists and the xenophobic military personnel with the human expedition.

Over the course of their interaction, the humans are trying to decide whether the discovery of other life in the universe is a cause for fear or celebration.