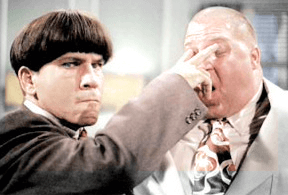 You have just gotten into a fight with another character, resulting in punches, kicks, brawls, half-nelsons, and any other fighting move you can think of. Just when the enemy has you held up, what's the best way to counter back? Poke him in the eyes, and while he's holding his eyes in pain, you make your getaway.

Essentially, this is a type of fighting style that can be used in about any form of media. The only defense to an Eye Poke is holding your hand vertically in front of your nose to block it (then again this could be countered by using the index fingers of both hands, as Curly of The Three Stooges was painfully aware).

Rigby is too weak to throw punches, but that doesn't mean he can't find alternate attacks.

Rigby is too weak to throw punches, but that doesn't mean he can't find alternate attacks.