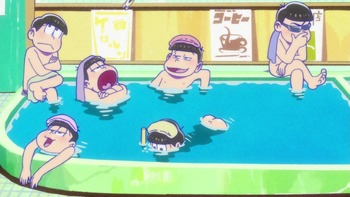 Kakei: By the way… Mizumachi, what are you doing?
Mizumachi: Eh? What do you mean? When you're in a public bath, you either swim or peep, right?
Everyone: YOU DO NEITHER!
— Eyeshield 21
Advertisement:

When people are seen going to and bathing in a public bath. Public baths have appeared in many cultures, from the ancient Romans to the Russians and Japanese. Usually gender segregated, everyone spends their time washing off and relaxing with their fellow sex.

Public baths frequently appear in media from countries such as Japan and Turkey, where they are still commonplace. They are usually used by lower class citizens who don't have a bathtub in their home (just a shower), or when the household's bathtub is not working. When going to and from one, expect everyone to be wearing a really plain towel, to be carrying a bath pan with shampoo and conditioner (which can be used as a weapon if needed), and to drink some nice, cold milk after they get out.

Different cultures have particular customs associated with the bathhouse, as well as localized names: in Turkey they are called hamam, in Korea jjimjilbang, and in Russia banya. A Japanese bath house (referred to as a sento) will always have a large wall painting of Mt Fuji in the background, as bathing in the shadow of Mt Fuji is good luck. In modern Finland, the use of steam bathhouses called saunas is not only a popular communal activity, but an integral part of family life.

Scenes come in two types: washing up (with extremely high chance of Fanservice) and then relaxing in the bath talking. Depending on the media, chances of "skinship" or Ho Yay subtext are very high; guaranteed, in fact, if a female Lovable Sex Maniac is around. If a male Lovable Sex Maniac is present on the male side, expect him to try to sneak a peek at the girls' side, if the baths aren't already co-ed. On the other end of the spectrum, the bathhouse can be the ideal place to carry out a murder: potential victims will likely be unarmed and vulnerable, and in the event of a struggle, the abundance of hard surfaces alone are a magnet for lethal head trauma injuries.

Censor Steam is usually on, as well as conveniently placed soap bubblesnote at least in the TV version — if there is a Too Hot for TV version then these will be removed.. You may also see characters carrying a Modesty Towel into the actual bath, although in Real Life, towels are almost never allowed in.

This type of scene is so common in anime there is even a wiki that catalogues them.