Fanfic / A Thing of Vikings 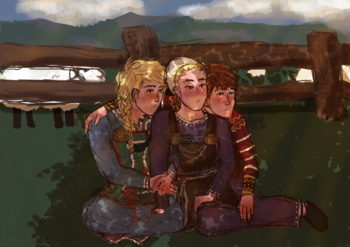 on Tumblr, and used with credit.
Advertisement:

It's 1040 AD. The Low Middle Ages, near the end of The Viking Age. It's pretty much our world, with a couple of small differences:

How might this affect history and society? A whole lot of Historical Domain Characters are about to find out!

A Thing of Vikings is an Alternate History fanfic, placing the first entry of the How to Train Your Dragon animated movie franchise into real history and letting things unwind from there, with other characters and plot elements taken from as needed from the rest of the HTTYD franchise and occasionally other properties.

It can be read at Archive of Our Own here

It used to be on fanfiction.net, but due to harassment up to and including death threats, it has been deleted and access has been restricted on Archive of Our Own. The restriction was lifted for a time, but after additional Trumpist harassment, the story commenting is locked down for registered AO3 members only again as of January 2022.

is a one-shot side-story to A Thing of Vikings the author co-wrote with Mr_Crocodile that involves original characters who live in what is now Spain.

The author has also written another HTTYD fanfic taking place during the Age of Sail called The Savage Seas.