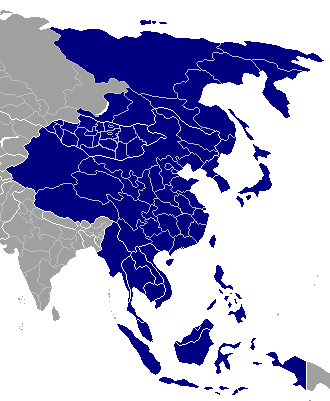 Whenever somebody (certainly a North American) talks about "Asia," this is usually the region they are referring to. Consisting of the Russian Far East region of North Asia, Southeast Asia, and East Asia, the Far East is a rising power in the world, with many of the world's biggest economic and cultural centers, including China, South Korea, and Japan flourishing in it, and is one of the most highly populated regions in the world, with China, the country with the largest population in the world, being part of it. Some definitions of the region also include South Asia for cultural and economic reasons.
Advertisement:

The term "Far East" originates from European geopolitical discourse in the 12th century, which split Asia into three defined "easts": the Near East, which encompassed Western Asia and has generally been replaced by the modern definition of The Middle East, the Middle East, which encompassed Central Asia and northwestern South Asia, and the Far East, which encompassed countries along the western Pacific and eastern Indian Oceans. The term is also used in a cultural sense in addition to geographic, so Oceania is never included despite neighboring Southeast Asia and being even further east than it. Since the '60s, the term has been regarded as Eurocentric, dated, and racist. It is outright proscribed to be used in serious literature outside of certain academic circles like history, being replaced with neutral regional terms such as East Asia, North Asia, and Southeast Asia, with East and Southeast Asia (ESEA) becoming the most common term for the region in international mass media outlets. Only Russia still uses that term, but only for its own Far Eastern region in Northeast Asia.

Please do not mistake all East Asians as looking the same or see them as sharing the same, vaguely Chinese/Japanese culture. While the inhabitants of the different countries may look similar to outsiders (which is something hypocritical to say, considering that Europeans and Africans each have the same "white" and "black" look to outsiders as well. It all bogs down to your experience mingling with them to be able to see the difference) and have some similar aspects in their cultures, Asia is an extremely diverse continent culturally and cannot be lumped into a single box, even regionally. To further complicate the issue, many countries in the region do not get along well with each other for historical reasons, to say the least.

For the trope, see Far East.