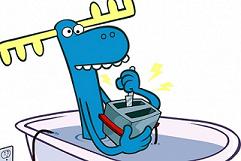 Never trust a moose with a toaster, a knife, and a bathtub.
"Dumb like a moose, Dib. DUMB LIKE A MOOSE!"
— Invader Zim
Advertisement:

In Real Life, moose, Alces alces, are at least moderately intelligent as far as animals go, and there's nothing to say they aren't at least as smart as other deer species. In fiction, however, they can be shown as very dumb. At best, they are a bit slow on the uptake, and at worst, they can even be portrayed as Too Dumb to Live. They very often speak with a Simpleton Voice.

Likely due to the inherently funny name, moose are the only species of deer portrayed as stupid in fiction rather than graceful or marvelous, including themselves under the older name "(Eurasian) elk" (not to be confused with Cervus canadensis, the large deer species referred to as "elk" in North America). And no, there's absolutely no difference. "Moose" is just the Abenaki name, which caught on in the East around the same time the Lewis and Clark expedition found the similar-looking Northwestern "elk". They are also the largest extant species of deer which, paired with their enormous antlers, often translates into "big and clumsy". More negative portrayals of moose will have them be The Brute with Dumb Muscle tendencies, like Angry, Angry Hippos.

See Dogs Are Dumb, Doofy Dodo, and Dumb Dinos for other animals portrayed as having similarly low intelligence.