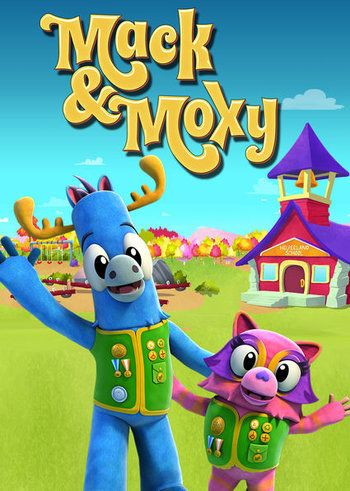 Mack and Moxy, as they appear in CGI.

Mack & Moxy is animated series which aired on PBS Kids that aims to inspire the next generation of humanitarians. Each episode is aimed at teaching children the details of and how they can become involved in social causes, such as preserving national parks, helping the hungry, or being prepared for emergencies. In each installment, Mack & Moxy (Brian Drummond and Kathleen Barr, respectively) are given a mission by an Admirable (played by special guest stars such as Rachael Ray and Kal Penn) to find the egg of a "Great Helpee" in HelpeeLand, bring it back to their airship to hatch, and share its happiness with the world. They are helped by a real child, or "trooper," who is converted into an animated character via a device known as the "shimmerizer," along with Mack & Moxy, who appear as full-body costumed-characters when first meeting the child on their airship. However, sharing doesn't work for Shelfish Sheldon (voiced by Hank Azaria - The Simpsons, etc.), who wants to take the Great Helpees and keep all their happiness to himself. Thus, it is up to Mack, Moxy and the kids to stop him. They are assisted by Clixx, a robot who provides services from Helpee HQ via "instant moosaging." At the end of each episode, viewers are given information about real-life organizations connected with the cause for each installment, such as the National Parks Foundation, Feeding America and the American Red Cross. The show has an official trailer, which can be viewed here

The series is presented in widescreen HD. It aired on a limited number of PBS stations and is available on Netflix. Music videos of all the shows songs are available through the show's official channel

on YouTube as well as a number of clips, and the option to purchase the complete series. The show's official website can be found here

Next time, Shelfish Sheldon shall succeed!