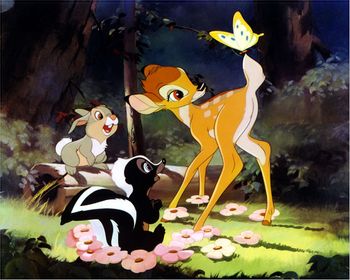 Released on August 13, 1942, Bambi is the fifth movie in the Disney Animated Canon. It's based on Bambi, a Life in the Woods (Bambi, Eine Lebensgeschichte aus dem Walde) a 1923 novel by Austrian author Felix Salten.

Both the book and the movie are a Coming-of-Age Story that follows the titular character, a young deer (a roe deer in the book, a white-tailed deer in the movie), from birth to adulthood in the forests of Austria (in the book) or Maine (in the movie).

Salten's sequel book, Bambi's Children, was also considered by Walt Disney for a film adaptation, though was cancelled in early development. Disney did make an adaptation of the novel through their Dell published comic series in 1943 however, alongside one based on the first film. Nearly a decade later, a one-shot manga version was drawn by none other than longtime Disney admirer Osamu Tezuka, to tie in with the film's belated Japanese release in 1951.

Despite this, a Midquel, Bambi II, was released in 2006 (a Direct to Video release for parts of US and Asia, and theatrical elsewhere). It focuses on the period of Bambi's life immediately following his mother's death. Released 64 years after the original film, it holds the world record for the longest span of time between two consecutive installments of a film franchise.

There is a spin off series of books centered around Thumper's family when he was a baby. It's called "Disney Bunnies".

In 2020 Disney announced they would be remaking the film with the same photo-realistic animation style as The Lion King (2019).

Example of:
What Is This Thing You Call "Love"?

I Bring You a Song

I Bring You a Song