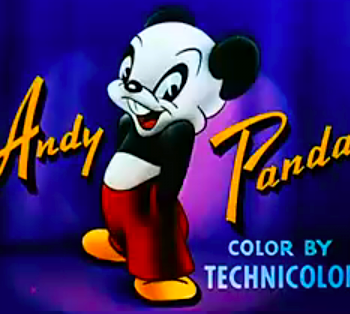 Andy Panda was a recurring character of the Walter Lantz cartoon studio, his series lasting from 1939 to 1949, and supported by cameos in other cartoons, as well as appearances in comic books and merchandise. While virtually unknown compared to Lantz's other major star, the Andy Panda series still managed to crank out some fairly entertaining cartoons in its run.

The earliest batch of cartoons portrayed Andy as a young Cheerful Child and featured the misadventures of him and his Bumbling Dad, Poppa Panda. Later shorts gave Andy sole top billing and had him aged up into an adult Everyman in the same vein as another contemporary animal cartoon character.

Compare MGM's own cartoon bear Barney Bear, which ran around the same time (and co-incidentally debuted in the same year).

While Woody Woodpecker might have ended up being more of a success than Andy Panda in terms of cartoons, he did appear in a good number of comics by John Stanley for years after his cartoons had stopped being produced.