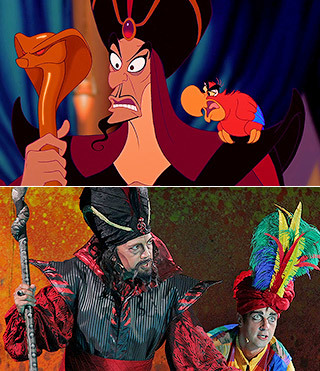 A bird on the shoulder is worth a guy wearing a hat.
Advertisement:

You read a book about a hero and his faithful pet, but when the book is adapted to film, the hero's pet has been changed into a different species. This is what's known as an Adaptation Species Change.

In the case of domestic animals, especially dogs, there can be an adaptation breed change.

This trope may also apply with the live-action adaptation of a work which has a Talking Animal character, with said animal turned into a human, specially in adaptations for theatre or low budget movies that can't count on CGI or animatronics.

See also Dub Species Change, when this happens in a dub of a work rather than a new adaptation. Compare: Adaptation Name Change, Adaptation Dye-Job, Anthropomorphic Animal Adaptation, and Race Lift, where the character remains the same species (human), but a different type of human. Can be the result of Demythification and Doing In the Wizard if the adaptation is trying to be more "realistic" than the work it was based off.