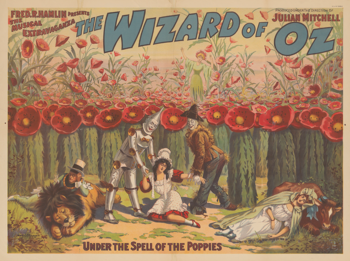 The first adaptation of the famous Land of Oz franchise, The Wizard Of Oz was a musical based off of The Wonderful Wizard of Oz. It was released just two years after the book, in 1902, and was put on Broadway in 1903. L. Frank Baum himself is the bookwriter, with Glen MacDonough as the jokewriter.

The play tells the story of a girl from Kansas named Dorothy Gale, and her cow Imogene, who lands in the magical country of Oz due to a cyclone. Dorothy must go on an adventure to the Emerald City to meet the Wizard of Oz and find her way home. Along the way she meets a cast of colorful characters.

The Wizard Of Oz led directly to Babes in Toyland being produced in 1903 as a Spiritual Successor. The success of the play also led Baum to write The Marvelous Land of Oz. The famous MGM film also takes some inspiration from the play.

The Wizard of Oz provides examples of: