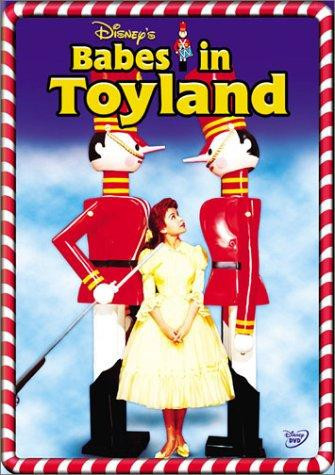 "Toyland, Toyland, dear little girl and boy land.
While you dwell within it, you are ever happy there."
Advertisement:

Babes in Toyland began as a 1903 operetta by popular American composer Victor Herbert in which Fairy Tale and Mother Goose characters acted out a fairly standard Babes-In-The-Wood plot in Toyland, where Evil Uncle Barnaby has attempted to do away with his niece and nephew Jane and Alan — and incidentally to steal Alan's lady love, Contrary Mary. The operetta featured some of Herbert's most famous musical pieces, such as "Castle In Spain," "Go To Sleep, Slumber Deep," "I Can't Do The Sum," the "March of the Toys," and "Toyland."

In 1934 a film version starring Laurel and Hardy was made. The film is also known by its alternate titles Laurel and Hardy in Toyland, Revenge Is Sweet, March of the Wooden Soldiers and Wooden Soldiers. The filmnote written by Hal Roach, extensively revised by Stan Laurel follows Stan Laurel and Oliver Hardy in their misadventures, attempting to thwart the villainous Mr. Barnaby (the "crooked little man" from the nursery rhyme) in his lascivious designs upon the heroine, Little Bo-Peep.

In 1961 Walt Disney Productions made a Live-Action version, starring Annette Funicello as Mary Contrary, Ray Bolger as Barnaby, Tommy Sands as Tom, Tom the Piper's Son, and Ed Wynn as the Toymaker. Barnaby's henchmen were portrayed by Henry Calvin and Gene Sheldon in a manner directly reminiscent of Laurel and Hardy from the 1934 film. It marked Disney's first all-live-action musical, and after they began refusing to acknowledge Song of the South, they instead declared Babes their first live-action musical overall.

In 1975, the Light Opera of Manhattan, with the approval of the Victor Herbert Foundation, presented an adaptation with a new book and lyrics by Alice Hammerstein Mathias (daughter of Oscar Hammerstein II) that ran every holiday season in New York from 1975-88 and still tours occasionally. In this version, Jane and Alan feel neglected by their workaholic, discipline-minded parents, so they run away to Toyland in the belief they will be happier there; they are welcomed by the Toymaker, who cautions them against falling too far under Toyland's spell, but the singing and dancing toys are too much for the siblings to resist. Barnaby is replaced as the main villain by a corrupt detective whom Jane and Alan's parents send to Toyland to retrieve them; once there, he forces the children to help him steal a new toy soldier design from the Toymaker. The music is largely unchanged, although it includes a few melodies from other Herbert operettas.

Not to be confused with The '90s Alternative Rock band Babes in Toyland.

Tropes used across various versions of Babes in Toyland include:

Tropes specific to the 1934 Babes in Toyland include:

Tropes specific to the 1961 Babes in Toyland include:

Tropes specific to the 1986 Babes in Toyland include: