Literature / The Marvelous Land of Oz 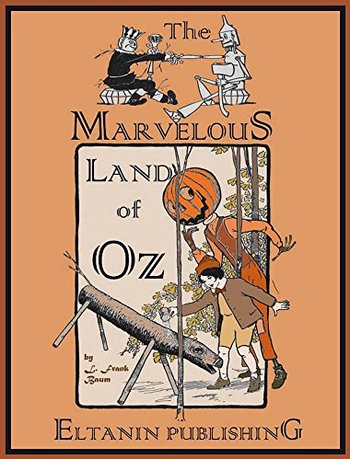 The Marvelous Land of Oz (subsequently republished as The Land of Oz) is the second of L. Frank Baum's Oz books. It was first published in 1904 to capitalize on the popularity of the theater adaptation of the first book, before the publisher convinced Baum to write at least four more Oz books.

Dorothy, the protagonist of The Wonderful Wizard of Oz, is never seen. Instead, the protagonist is a native of Oz, an orphan called Tippetarius (or "Tip" for short). After escaping his abusive caretaker, the old witch Mombi, Tip sets out to seek his fortune along with his two companions: Jack Pumpkinhead and the Saw-Horse, both of which he created and brought to life with Mombi's "Powder of Life".

Much like Dorothy before him, Tip also has a "Wicked Witch" to deal with: General Jinjur, the commander of the all-female Army of Revolt, who means to ransack the Emerald City and take over Oz on the grounds that (what with the Wizard and the many kings before him) it's about time a woman had a turn on the throne.

Tip also becomes involved in the search for Princess Ozma, the long-lost daughter of the last king of Oz, who disappeared as an infant shortly after the Wizard arrived in Oz. Tip's search, like Dorothy's, ends with the discovery that what he was looking for was under his nose (perhaps more accurately, behind his nose) the whole time, had he only known it. Princess Ozma is acclaimed the ruler of Oz, and goes on to become a major character in the rest of the series.

Adapted to the screen as a kiddie matinee cheapie by shlockmeister Barry Mahon as The Wonderful Land Of Oz. Parts of this book (and the next, Ozma of Oz) were incorporated into the film Return to Oz. It was also adapted as the second story arc in the anime The Wonderful Wizard of Oz.