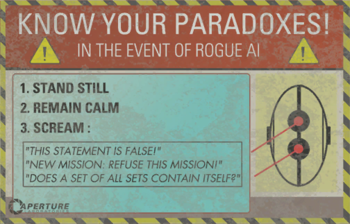 , which is often solved by declaring that a set cannot contain itself. This makes "the set of all sets" an impossible construct.
Advertisement:
"I cannot — yet I must! How do you calculate that? At what point on the graph do 'must' and 'cannot' meet?"
— Ro-Man, Robot Monster

Is your sentient supercomputer acting up? Good news. There's an easy solution: confuse it.

If you give a computer nonsensical orders in the real world it will, generally, do nothing (or possibly appear to freeze as it loops eternally trying to find a solution to the unsolvable problem presented to it). In fiction-land, however, it will explode. It may start stammering, "I must... but I can't... But I must..." beforehand. The easiest way to confuse it is with the Liar's Paradox, i.e. "this statement is a lie". A fictional computer will attempt to debate and solve the paradox until it melts down. If the computer is a robot, this will probably result in Your Head A-Splode.

Paradoxes and contradictory statements (especially contradictory orders) have become the primary material used to build the Logic Bomb and thus the standard way to defeat any sophisticated, computerized system or AI. Be warned; if the Logic Bomb fails to destroy the system outright (and in some cases, even when it does), the system's surviving remnants may go insane and attempt to kill you just the same.

Also note that Ridiculously Human Robots (and some very advanced AIs) are generally able to recognize and defuse logic bombs on sight, long before they go off (and may view this as a particularly irritating kind of Fantastic Racism). Some ridiculously dumb AIs are also immune to logic bombs by virtue of not understanding the concept of paradox — a sort of inverted case of Achievements in Ignorance.

Occasionally the way to shut down such a computer is less like a few odd statements, and more like an advanced philosophical debate on the nature of truth, free will and purpose. The end result is still a super computer muttering an error several times before exploding.

While this might have worked before the mid-1990s, computer systems designed since then are capable of creating discrete "threads" to handle problems, which run in their own space while the critical parts of the system continue uninterrupted. When fed a paradoxical statement, a sufficiently well-programmed system would just notice the Logic Bomb has taken up too many resources and kill its thread, such as when Windows flags an application as "Not Responding" and prompts you to close it.

Computer software is often vulnerable to being fed inputs that cause buffer overflows or inject commands. Of course these don't cause the machine to explode, but instead places the computing device entirely under your control. They can also be bogged down or BSoD'd with programs such as fork bombs

(each instance of the program opens two more). However, things like buffer or stack overflows are artifacts of our current underlying computer hardware architectures and it's quite plausible that such things won't exist in future computer systems. Overload attacks are probably always going to be realistic, though.

If you want to do this to a well-organized group of people, use an Apple of Discord instead.

When the logical error outright retcons someone or something out of existence is Puff of Logic. A Logic Bomb that undoes reality itself is a Reality-Breaking Paradox. A Temporal Paradox might be the cause.

For when the player does this to a Video Game A.I., see A.I. Breaker.

For the human equivalent, see some of the entries under Brown Note and You Cannot Grasp the True Form. Koans can be seen as a less harmful form, used for religious or mystical purposes.

Not to be confused with Logical Fallacies (though some Logic Bombs use the fallacies listed in that page). For a similar mutually negating pair of principles, see Catch-22 Dilemma.

See also Readings Blew Up the Scale and Explosive Instrumentation.

Alternative Title(s): Does Not Compute