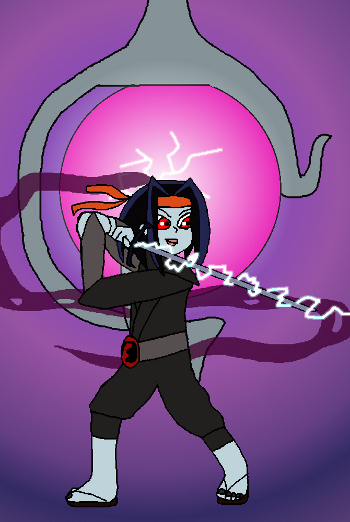 is a Jackie Chan Adventures and W.I.T.C.H. crossover fanfiction by chaotic9, and a part of Project Dark Jade. The author has another project story called A Frog in Arkham Asylum

The premise of the story is that Drago, during his defeat and banishment at the end of the final episode, cast a spell so that Jade, who he viewed as an Arch-Enemy, was cast out of her world, to an entirely seperate universe.

She then finds herself in Meridian at the start of the second season of W.I.T.C.H., her Queen of the Shadowkhan persona partially reawakened, and gets caught up in the battle between the Guardians and Nerissa, with circumstances forcing her to ally with the crazy sorceress in her quest to return home.

Official Description: Sometimes even the heroes greatest victory can be tainted. And that cost Jade her place in her Universe. Now in another Universe watched by a place called Kandrakar and its Guardians, with some of the power she once possessed, Jade will try to find a way home, by any means necessary. But can she prevail in an Universe where Light seems to always beat Darkness?