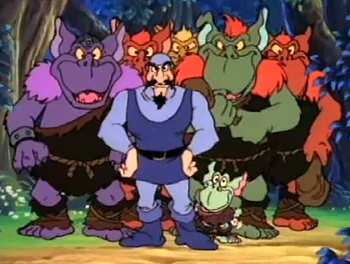 As everyone knows, Villains have henchmen, but some aren't content with recruiting from the existing races and decide to make their own. The result is this trope, a race or species of beings that were created for the sole purpose of acting as troops for their creator, who for some reason is generally the bad guy, although there might be a non-evil example out there somewhere. The degree to which the Henchmen Race is "purpose built" can vary somewhat, ranging from the "customization" of an existing race to making one from scratch.

This often goes hand in hand with the presence of a King Mook. Often, though, the King Mook is more of an overall general in a greater villain's army.

May lead to Always Chaotic Evil, depending on the work. May overlap with Servant Race and Clone Army. When combined with Woobie Species, it results in an army of Sympathetic Sentient Weapons.