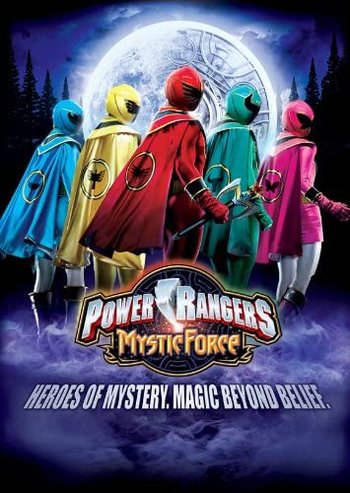 The 14th season of Power Rangers, based on Mahou Sentai Magiranger. After an earthquake hits the city of Briarwood, a stranger appears and asks for help locating someone in the nearby forest. But the local townsfolk are superstitious about the woods, and the only one brave enough to volunteer is Nick, a wanderer just passing through. A group of young locals join him, not wanting to be shown up by an outsider.

The group soon discovers the secret of Briarwood Forest: it is home to a pocket dimension inhabited by mystical creatures, and the stranger who summoned them is a powerful sorceress. More than that, their bravery marks them as wizards destined to protect both them and the human realm from the forces of the Underworld that have been freed by the quake. They are given the power to become Rangers to give their magical powers an extra edge, but if they're going to win they'll need to find out what happened years ago when the monsters were sealed...

Succeeded by Power Rangers Operation Overdrive. Xander would re-appear in the Milestone Celebration team up "Once A Ranger", but this season didn't get a proper team up (the closest to one with S.P.D. was Piggy making a brief cameo in episode 17, "Ranger Down").