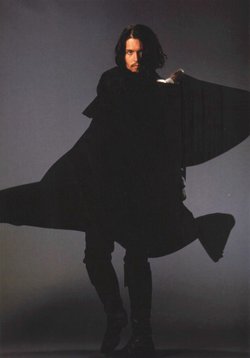 Doyle: He likes playing the hero; walking off into the dark with his long coat flowing behind him in a mysterious and attractive way.
Cordelia: Is this a private moment? Because I can leave you alone.
Doyle: No, no, I'm not saying I'm attracted.
[A few minutes later we get a hero shot of Angel striding out the door, his longcoat billowing behind.]
Doyle: Maybe I'm a little attracted...
— Angel, "I Fall To Pieces"
Advertisement:

Not enough Dramatic Wind to blow your cape around in a satisfactory manner? Make your own! The easiest way is to turn around quickly, causing your cape to billow out behind. You might also want to hold it out with one hand as you swoop for maximum surface area, but a true master of the technique can achieve awesome cape flaring with a minimum of movement. Running forward or other sudden movements can also make a cape flare, but is less dignified. Be wary of a Cape Snag however, lest it become a Failed Attempt at Drama or worse.

This is a favorite move of any character that wears a cape, especially the Dastardly Whiplash. However, any character with a cape can pull it off. It can also be done with a cloak, robe, coat, or any similar long garment, or even with long hair.

open/close all folders
Anime & Manga
Comic Books
Film — Animated
Advertisement:
Film — Live-Action
Literature
The masked rider reared his horse dramatically, and his black cape swirled around him. Then he plunged down the far side of the crag and was gone.
"Isn't that the most ridiculous thing you've ever seen in your life?"
Live-Action TV
Theatre
Video Games
Webcomics
Western Animation