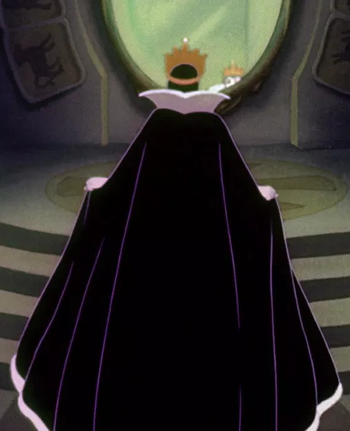 Who wears the most sinister cape of all?
Advertisement:

In the 19th century, the opera cape was a fashion accessory that upper class men wore At the Opera Tonight. It was grand, but not too flashy, and went great with a top hat, white tie and tails. But fashion changed, and the cape went out of style, destined to fade into the kind of outfit you would see only in Period Pieces.

But then Dracula was adapted into a hit stage play, and an even bigger hit film. Bela Lugosi used his old-fashioned cape, and turned it into something iconic, giving the garment a sense of grandeur and menace, especially as he flourished it whenever possible.

Since then, any similar cape has become an iconic accessory for major villains everywhere, from The Dragon to the Evil Overlord. Also a standard outfit of the Classical Movie Vampire. Even Dastardly Whiplash has been known to twirl one.

But all have to fit these three criteria:

A Sister Trope to High Collar of Doom (which is often paired with this trope, and was also codified by Lugosi's performance), Black Cloak.