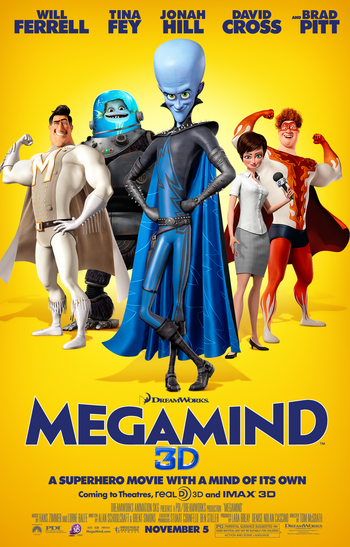 The superhero movie will never be the same.
"Here's my day so far: Went to jail, lost the girl of my dreams, and got my butt kicked pretty good. Still, things could be a lot worse. ... Oh, that's right. I'm falling to my death. Guess they can't. How did it all come to this, you ask? My end starts at the beginning... the very beginning..."
— Megamind

What happens when you take the Superman mythos and give the point of view (and ultimate victory) to Lex Luthor/Brainiac instead? You get this film from Dreamworks Animation.

In the world of spoof superheroes, Megamind (voiced by Will Ferrell), the greatest villain in the world, is locked in an eternal battle against the seemingly invincible and perfect Metro Man (Brad Pitt). However, in their last confrontation over go-to Damsel in Distress Roxanne Ritchi (Tina Fey), Megamind finally (and surprisingly) manages to defeat his Arch-Nemesis.

After initially gloating over his victory, Megamind soon realizes that his greatest wish is not all it's been cracked up to be. With the help of his loyal Minion (David Cross), Megamind decides to create a new hero to make his status meaningful. He chooses Roxanne's awkward camera man Hal Stewart (Jonah Hill) and trains him to become a new hero called "Tighten". Unfortunately, Tighten, instead of using his powers for good, sets out for mass destruction, positioning Megamind to save the day for the first time in his life.

Not to be confused with Mega Man (despite the protagonist's blue-ness as well as the fact that the villain's name is "Mega Mind" and the hero's name is "Metro Man").