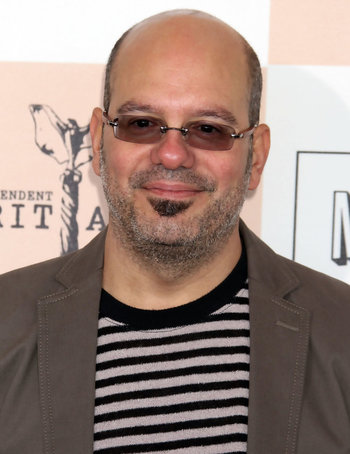 David Cross (born April 4, 1964) is an American actor, comedian and screenwriter. He's known for his incredibly dark, sardonic sense of humor and his decidedly left-leaning views. With Bob Odenkirk, he wrote and starred in Mr. Show, and its spiritual spinoff, the Netflix Original W Bob And David.

Cross is also an actor; his most famous role is Tobias Funke from Arrested Development, and he played the titular role in The Increasingly Poor Decisions of Todd Margaret . He's also appeared in films ranging from Eternal Sunshine of the Spotless Mind to the Alvin and the Chipmunks series and had a rare turn as the Straight Man in It's a Disaster!. He's the voice of Master Crane in the Kung Fu Panda films note but not the TV series.

And that's not all! Cross has released several albums and a DVD of stand-up comedy through Sub Pop. He also sang the Expository Theme Tune for the fourth season of Cheap Seats, and he's done guest voices for the Adult Swim series Aqua Teen Hunger Force and Rick and Morty. And during the first season of The Colbert Report, he played liberal talking head "Russ Lieber", Stephen Colbert's Sitcom Arch-Nemesis.

In 2014, he wrote and directed the indie dramedy Hits, about the public obsession with YouTube fame.

Associated tropes related to his career: