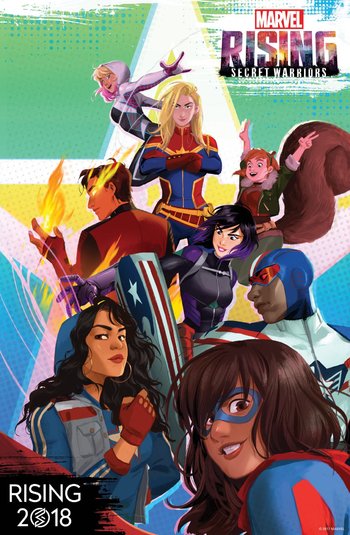 "Don't care if the world ain't ready for me!"
Advertisement:

Marvel Rising: Secret Warriors is a 2018 animated television film based (loosely) on the superhero team of the same name. It is the third entry in the cross-platform Marvel Rising franchise, following the 2018 comic and Marvel Rising: Initiation. The movie premiered as a simulcast on September 30, 2018, airing on both Disney Channel and Disney XD.

While Kamala Khan is ruminating on her abilities as a superhero and her identity as an Inhuman, she and Squirrel Girl find themselves learning about a recent rise in both Inhuman crimes and disappearances. With S.H.I.E.L.D. rebuffing their offer to help investigate, the duo and a few other heroes set out on their own to figure out why so many of these youth are appearing to go rogue before vanishing. In the process, Kamala begins to piece together that they may be facing a problem that threatens the whole world.

was uploaded to the Marvel HQ YouTube channel on December 12, 2018, while Chasing Ghosts