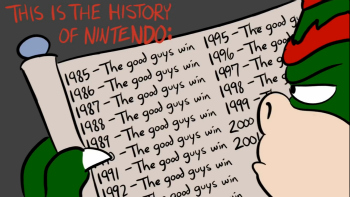 We can give Bowser some credit for his persistence, but not much else.
"Dude, this is television. The good guys always win."
— Beast Boy, Teen Titans (2003)
Advertisement:

If a story has a hero who fights a villain (but not always), then the hero will win in the end.

Sure, there might be stumbles along the way. It may take a Hero's Journey or two to Earn Your Happy Ending. Evil might score a few victories first, and maybe even almost win in the Darkest Hour before Good can save the day at the last minute. In the end, however, there's usually never any doubt in the audience's minds that the forces of good will prevail. Even in video games that allow you to play as the bad guys, the minute the sequel comes out, expect it to make the "good" ending the only canon one, or in some cases, be inevitably thwarted by a Hero Antagonist towards the end..

It doesn't matter how big the Big Bad is or how puny The Hero is—not only can the Kid Hero foil the Galactic Conqueror, despite how improbable it logically ought to be, but the audience expects it, and will be sincerely shocked if they don't.

This trope is so omnipresent, especially in works with Black-and-White Morality, that attempts to subvert it can easily lead to Like You Would Really Do It, and any work with a Downer Ending where The Bad Guy Wins for once automatically catapults itself to the cynical end of the Sliding Scale of Idealism Versus Cynicism. (Except for certain circumstances, like if the villain winning won't actually hurt anything.)

Side effects of this trope may include Plot Armor, Invincible Incompetent, and Underdogs Never Lose. Compare Happy Ending and Happily Ever After, which are closely related, and Invincible Hero, where not only does the good guy win in the end, but he also wins in every intermediate step. May be justified with Evil Only Has to Win Once, where a villain victory would mean the end of the work (and often, the world within). Contrast The Bad Guy Wins. See also Villain Protagonist.

Keep in mind that Tropes Are Tools. This is considered to be the general rule of fiction. Having the villains win just for the sake of subverting expectations isn't bound to always have the reaction writers expect and can leave a bad taste in viewers' mouths. Especially if the bad guy in particular is a total scumbag.

Please do not list examples on this page. After all, there is a reason for the "Always" in the trope name. (Plus, we'd be here forever.)