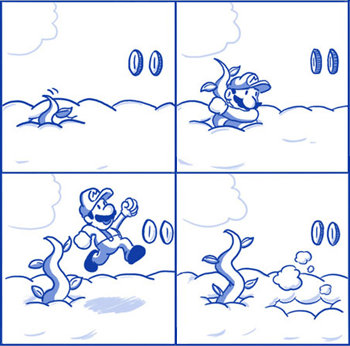 Yeah, because we all know how solid clouds really are.
Advertisement:

The Fake Platform appears to be solid, but doesn't support your weight for even a moment if you land on it. Unlike the Temporary Platform, which you can run across or jump off of, the Fake Platform drops you instantly if you set foot on it. Usually, this is over a Bottomless Pit or Spikes of Doom.

Annoying even if you know it's a trap, because it tends to restrict movement in ways that empty air in the same spot wouldn't.

Yet another type of Malevolent Architecture. May result from Depth Perplexion.

The typical Platform Hell game is loaded with these, but will only ever spring them on you when you least expect it.

For examples of this type of trap in other media, see This Is Not a Floor.