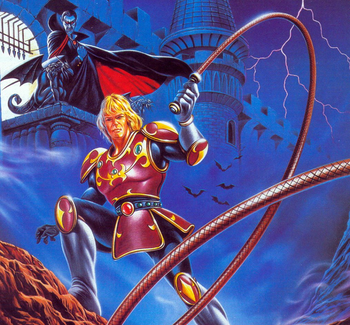 Since Dracula was dead at the time, Count Strahd von Zarovich filled in for him for the box art.
"What a horrible night to have a curse."note Or, loosely translated: "And so begins the frightening night.", in the Japanese version.
— Narration
Advertisement:

The second entry in the Castlevania series, set seven years after the original. Simon Belmont was victorious over Dracula, yet it feels like someone's driven a stake through his heart: He's been struck with Dracula's curse (not to be confused with the game called Dracula's Curse), preserving the injuries he sustained in that battle.

With not long to live, Simon is met by a Waif Prophet in a dream who reveals how to shatter the curse: Simon must collect the five body parts of Dracula from five well guarded mansions and deliver them to the ruins of Castlevania. There, Simon can resurrect Dracula in order to face him again in a final battle to decide the fate of both himself and Transylvania.

A very ambitious title for its day, Simon's Quest took the basic gameplay of its predecessor and mixed in RPG Elements such as experience levels, shops, a day/night cycle, and a freely-explorable world. It is the first Castlevania game in the Metroidvania genre. As a result of this (particularly its ambition perhaps exceeding the capabilities of its target platform and alloted development cycle), it received a very mixed reception and its triumphs and failings remain topics of debate even today.

The next game in the series would abandon most of the innovations in Simon's Quest to focus on improving the original Platform Game model. However, Konami would revisit the Castlevania II mold with Symphony of the Night ten years later, and this style would end up defining the subsequent decade of the franchise.

Not to be confused with Castlevania II: Belmont's Revenge.

WHAT A HORRIBLE NIGHT TO PROVIDE EXAMPLES OF TROPES:

THE INDEX LIST BELOW HAS VANQUISHED THE HORRIBLE NIGHT.